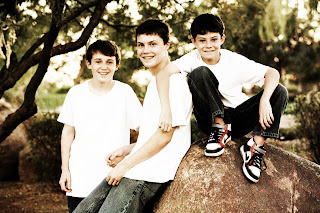 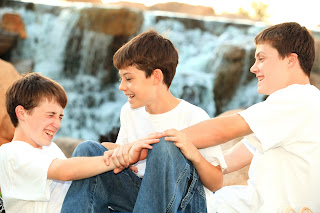 I shot Jake, Kyle and Cole for their fun and bubbly stepmom, Maureza to give to her husband for his birthday. While I don't shoot a lot of boys, it's always fun for me...maybe because they are just SO different from girls, always beating on each other, hitting, punching, socking, tackling, whatever they could manage. The violence was so...ummm, violent, that I pretty much giggled nervously throughout the entire shoot. The shot on the rocks was taken at the end of the day, when the boys discovered a massive dead fish, bloody and mangled, and cast aside on the edge of the Anthem park lake. It was so stinky and smelly that I almost passed out, but the boys loved it! They considered holding it for a while, but a couple of groin punches and an Indian burn or two later, settled in and got into this position... to me, it looks timeless, fierce, full of intrigue and love and fun...kind of like the kids in "The Outsiders". I love it!!

Posted by Unknown at 8:20 AM No comments: