Newcomers to Photography Be Smart, Be Cool, Use Fishing Wire

It's been brought to my attention that newcomers to photography feel like they don't have any way into the business. Being an assistant is a good thing, but hard to break in to. People don't want to share their secrets, maybe fearing that they're going to share them so well that the newbie (gosh, I hate that word) is going to outshoot the pro and take their jobs? I don't know. I never assisted. I almost wish I had. I had to just jump in and learn as I went myself, and it was hard, and demanding and super frustrating. I'm not saying that I know everything...far from it. I'm the ultimate gerryrigger. I have always subscribed to the theory that an eyelash curler and some fishing line can solve all of my photographic problems, and you know, so far, I've been right. 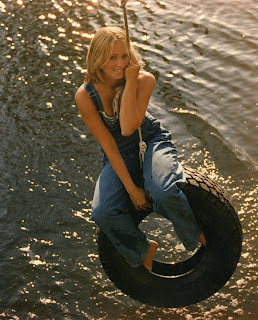 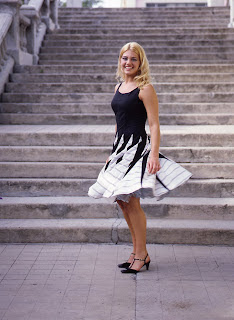 On the left shot, we used the fishing wire to pull the tire swing, and on the right, I have two strings to pull the skirt and...ok, I know that this sounds really bad, but I put a rock in her shoe.
Don't look at me like that . She knew about it. It just helped her with her expression. Anything for the shot, right? And their lashes? Eyelash curlers. Makes all the difference.
This is weird, though. I think I told you that I put out a post to find a photographer's assistant, which is a good way to get into the business as long as you're actually shooting, too. I got a billion responses, which at first was great, but then I checked the responses out...one of them actually said "Send me your resume and I'll consider working for you." Ummm, Huh? You want to work for me and you want me to send you MY resume? Do you really think I'd send you my resume? Then I got the fans.."I've been following your work for five years, oh my gosh, I'd do anything..." hey, who doesn't like to work with someone who admires them? So when I called them, ok, that one guy...he didn't call me back. Yeah, I didn't think I was really that famous. I had people who told me their life stories, financial histories, stalking accusations, bathroom schedules, alimony payments. I had people who told me, that they could only work Monday mornings, and could I change my shoot around because it would be worth the wait. One guy called me 17 times in two days.
I finally found a couple of normal guys who seem like they'll do a good job. No women...they just didn't apply. What's that all about? Maybe they don't use eyelash curlers? So if you're going the assistant route, be responsible. Be cool. and if you can't do that...Call back.

Posted by Unknown at 4:33 AM No comments: