Why I'm in this Business 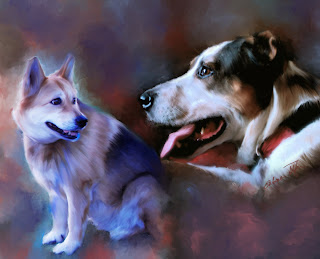 my business is all hearts and flowers and baked goods. It really is. That's why I'm a photographer. People cry. They hug me. They send me cupcakes. It's like good people just find me. Case in point: My kids love going to our season seats at Childsplay, a local children's theatre group in Tempe, so when I got a fundraising call from them, I was happy to help. I also offered to shoot the ladies' families who called me, so that they could see what I do. They didn't take me up on it, but instead, asked me to shoot their boss and his partner, which I was happy to do, but Steve's partner was sick, so they wanted me to paint their dogs, from Steve's pictures, which I did and when I called to ask how he liked it, this is the answer I received: "Well it's kind of a long story.We intended to give the photo to my boss Steve for his 50th birthday.Steve has been in and out of the office tending to his partner who is hospitalized due to complications stemming from chemotherapy.On the big day Steve was called to the hospital because his partner's condition was rapidly becoming worse.We didn't hear from him for 24 hours. So... the birthday celebration was canceled because it didn't feel right to celebrate. But lo and behold, Bob (Steve's partner) is out of the woods again. He hasn't been taking visitors but one actor from Childsplay. So we ended up giving it to Bob in the hospital since he can't see the animals. His sister is in town from Ohio helping take care of him and she said that when he saw the photo his eyes lit up and he started crying (tears of joy). Steve sent the office a message saying he hasn't seen Bob's eyes like that in weeks!Thank you so much for helping us make that happen. --Michelle Hargrave"
That's why I'm in this business. Pictures ARE relevant. They DO make a difference in people's lives. And those people that I touch with my art make a difference in my life right back. I think I'm going to go make some baked goods.

Posted by Unknown at 8:49 PM No comments: