My photo project today involved making a collage. Diving is a beautiful sport, but it's sooooooo hard to make a diving picture look good. I adore taking ordinary things and making them look cool, so I thought that this would be a good project. My daughter, Zoe dives, and her diving teacher is absolutely amazing, and we wanted to give him an end of summer gift for being so great, so I photographed him diving. 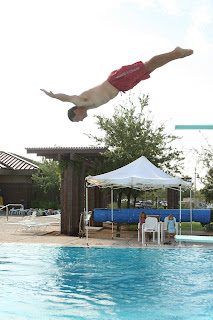 Gosh darn it, it was super early in the morning, but the light still looks hideous, and there are distracting elements to say the least...ALL OVER! So I slowed down the shutter speed to show the motion, which I liked...one part of his arm is in focus, or not moving, there are some amazing strings of water splash from the bounce of the board and some killer sunspots, but no face on the guy, and the ugly brown building, those fabulous orange cones really don't work at all, so I decided to try to make something special out 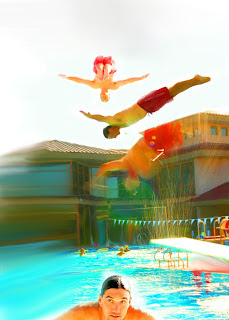 of it. I added two more shots, one of him diving, one of him getting out of the pool, because, after all, he is a good looking guy and also, there was some cool water pouring from his shoulders that I really liked. I saturated them a lot to be able to see them better, and softened the background to a kind of blurry neutral. I would have just made sky but I wanted to keep a sense of place for him, because he might be leaving and I thought it would be nice for him to remember the Anthem Community Center. I kept the people in the background to show him that he has fans, but for another design element: triangles. Yes, the omnipotent triangle. There are lots of reasons that people like pictures, but the triangle and rule of thirds are probably the most prevalent. They literally force your eye to bounce around the picture, keeping you on the photo for longer than normal. I use triangles a LOT, and I win awards a lot, so I'm guessing that they work. The people and the in-focus elbow of the blur shot make a little triangle that spreads out to Jeff's face. He's looking up and to our left, right at his left hand of the top picture. That hand makes a perfect triangle with his other hand and head, pointing to the next shot, which points with his head and hands to the blur, and the in-focus elbow, which leads to the close-up shot in the lower middle again. Even if you fall out of all of those triangles, the diving board, the line of flags, the roof on the top left and the roof at the right are all there to shove you back in to the main picture. So what if all of those triangles just pass you by and you're ready to turn the page? You may have noticed that I removed the orange cones from above the water, but there is still a red reflection. I changed the hue of the orange reflection to the same as his swim trunks, and formed a myriad of color triangles with the reflection, the blur, the other two diving shots, and his skin tone in the closeup so that you'll never, ever want to leave the shot. But I exaggerate. A lot.

The sun was too high in the sky and I was on the wrong side of my subject to get any good sky color, so I tried silhouetting Jeff: 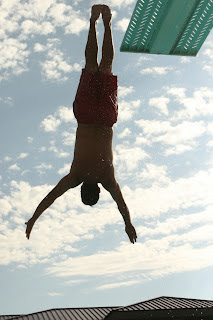 It wasn't a perfectly black silhouette...remember, I can make miracles happen with an eyelash curler, fishing wire and a sheet of aluminum foil, but as far as solid, tried and true "there's only one way to do this" technique, I'm totally allergic. Anyway, I played around and came up with this: 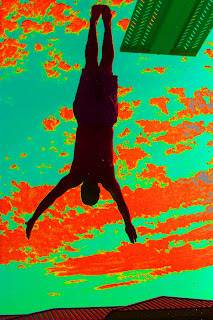 I kind of like it, what do you think?

Posted by Unknown at 1:06 AM No comments: