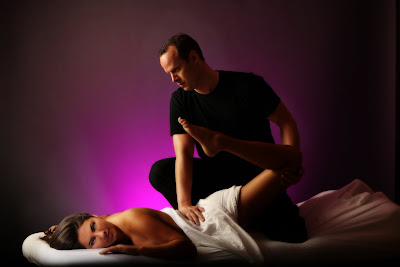 This week I was priveleged to shoot an ad for Dream Innovation's Matt Murdock, an Anthem massage therapist, who has innovated several new massages and teaches his techniques to massage therapists all over the world. Matt is my massage person, and his butterfly massage, shown above, is truly amazing, so I was very excited to shoot it, but terrified, that so many people are going to want his services after seeing his ad that he won't be available for me when I need him! Our beautiful and exotic model, Spencer, is local superstar business SWEAT's own Josh and Laura Roger's babysitter. Laura, after three kids, could be a model herself, she's just too sweet and self effacing to do it. :) Spencer, will be going to ASU in the fall, to become a physician's assistant. She's so going to dominate that school, thanks to her incredible, sparkling personality, and drop-dead gorgeous looks, both of which seem to come directly from her equally beautiful and sweet mom, Rulla, the director of catering at the Biltmore, which you would never guess because she's so tiny, whom I immediately clicked with because we had all of these funny, obscure things in common, like that we both got married at the Ritz-Carlton Laguna Nigel! We did several shots for both Matt's butterfly and rain massages. I really like a deep massage, as intense as you can get it, and the butterfly is beyond intense, so I tried to reflect it in the look and feel of the pose, lighting and expressions, which was pretty easy, because Spencer has that kind of dark intensity, and Matt knows exactly what to do. You would think that laying on a massage table and getting a massage for four hours would be a breeze of a modeling assignment, but think again...think about how when you lay down, your face smushes and kind of turns into the sheet, so the fabulous Spencer had to almost hover her face above the table so that it was just glancing the sheet and turn her face way up and away from it so that you could see her eyes. Good thing Matt was there to get the kinks out! I never let models see pictures direct from my camera, just in case there are blinks or awkward positioning, but Rulla had to leave and Matt was giving Spencer a ride home, so they both stayed and saw everything...I shouldn't have worried, because in the shots where Spencer was blinking, she just giggled about it, totally non self conscious, gotta LOVE that!! How refreshing. Just like I was the one to get the massage. Hmmm, I think I'm going to book my next massage with Matt right now!