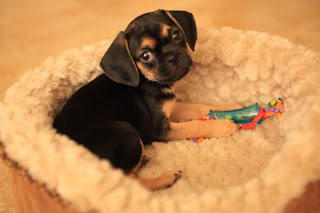 Ok, ok, I was sad the other day, about two weeks ago, and my sweet little hubby noticed. I'm never sad, so when I was sad, this was a big deal to him. Three hours later, we had a puppy! Aaaargh! But I must say, he's a great dog. His name is Dewey, named for the youngest brother in the "Malcolm in the Middle" series...Buzz is a namer. He always names our children and dogs for movie or sports stars. We've had Jordan the chow chow, named for Michael Jordan, Mugsy, the bulldog, named for Mugsy Bogues, the shortest basketball player in the NBA for quite a while; TT, our daughter, whose actual name is Tenley, was named for a character in the very forgettable movie, Summer Catch, starring Freddie Prinze jr. and Jessica Biel, and Zoe was almost "Sloan", the female lead in Ferris Bueller's Day off. I drew the line at that one. ;) Come to think of it, I was named for Barbara Stanwyck, whom my dad was majorly enamored with...the only person in our family who wasn't named for anyone famous is Buzz! He's a 3rd, so I guess that's ok!
I know that it feels early, because it's so darn hot, but it's definitely time to start booking your holiday pictures. I have a ton of new, cool ideas, so give me a call at 480.861.4529 before the best spots are taken up.
In late breaking news, I'll be shooting all over the nation in the next couple of weeks: Chicago this coming weekend, Reno next weekend, and Nauvoo, Illinois October 3rd through 6th. Nauvoo has a huge amount of LDS history, which I find absolutely fascinating. I will also be shooting up and down the California coast in June and July, and am currently booking family shots, weddings, and high school seniors for next summer. The response has been amazing, so please book early to get the best times.

Posted by Unknown at 7:54 AM No comments: